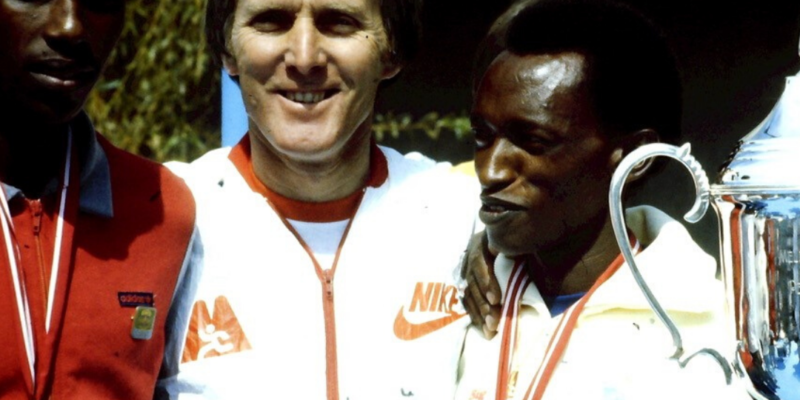 Melbourne Marathon’s first race director Ted Paulin has passed away, aged 81. IMG would like to pay our respects to one of the race’s iconic figures and pass on our best wishes to his family.

As race director from 1978 to 1994, he kept the race buzzing along with excitement.

The following tribute is taken from an extract from The Wall: The History of the Melbourne Marathon, written by Chris Muirden in 2012.

For the first 16 years of the race, there were three major constants – the curly hair and proud face of race chairman Brian Dixon, the smile of Shirley Young as she attempted another age group record and the worried look of Ted Paulin.

Despite not officially being named race director for the first six years, Paulin carried the weight of the race on his shoulders.

While Fred Lester and a succession of technical directors who followed were responsible for course logistics, Paulin was the face of the event, looking after sponsors, elite runners, prizes and the media in his role as sponsorship, publicity and promotion director.

As with many youngsters, Paulin had played football in his early twenties before taking up running as a 26-year-old.

“I played for Box Hill for a couple of years, but I couldn’t get a regular spot because I was a wingman and they didn’t have wings in the VFA,’’ Paulin said.

He joined the professionals and won a series of distance races, including the two-mile event at Stawell twice and the Victorian Professional Marathon title on seven occasions. He eventually became president of the Victorian Cross Country League.

It was in that role he met Brian Dixon and agreed to organise the Doxa Fun Run in 1974 on behalf of the VCCL. That association led to him being contacted by Dixon in 1978 when the Melbourne Marathon idea was spawned.

“At the time I worked for John Fairfax and The Age in advertising. I was called in by the Minister (Brian Dixon). We set up an office. It was at Olympic Park at the old medical centre in Swan St,’’ Paulin said when interviewed in 2012.

“I was there nearly every day. I wasn’t being paid back then. After the first year, the Dairy Authority chased me to be their promotions manager and that gave me more time to spend on the marathon.

“The first year was chaotic. There was no signage, except for the race banner, and barely enough toilets and the train service from Melbourne to Frankston was more than half an hour late.

“We were pretty green at the first one, but we got better. You had to. You always had complaints. You try and explain that if 6000 people want to urinate at the same time, then you are going to have a problem.’’

His passion for the race, which included a leading role in bringing out Bill Rodgers in 1982 and Juma Ikangaa in 1983, was eventually rewarded by Dixon in 1984 when he was given the title of executive director.

While Paulin fought many battles over the years, one of his biggest was trying to get the committee to increase the entry fee, which was $5 for the first three years and still just $17 in 1987.

“The entry fee wasn’t enough and I couldn’t talk the committee around to raise it,’’ he said. “For example, I saw the (timing) chips in Berlin way back when they came out, but we couldn’t afford them. We used just hand-written cards for timing in those days. It was vey old-fashioned stuff.’’

Paulin tried numerous things to stimulate the race after the initial boom. He expanded the events under the race umbrella to include a women’s 10km fun run and a half-marathon series and, once age limits were imposed, encouraged a shorter Marafun race for children.

In 1990 the Melbourne Marathon helped organise the Olympic Dream fun run and Paulin provided the blueprint for the Around the Bay Run which had 100 corporate teams competing.

Post-race hot tubs for runners were brought in, along with a Family Fiesta, and eventually he even agreed to change the date to June (1991) and the traditional Frankston to Melbourne course (1992).

But his lasting legacy is undoubtedly the Spartans. The concept of rewarding 10-year runners with membership to their own elite club has stood the test of time, with more than 1000 proud members.

Paulin became a prominent member of AIMS (Association of International Marathons and Distance Races) and, while regular trips to overseas marathons and meetings helped him with ideas and kept him in the loop with international athletes, it also caused waves among the committee, which was frustrated by the amount of money and time the race office was contributing to AIMS.

Dixon was voted out as race chairman just before the 1993 race and Paulin was ousted early in 1994. Both decisions by the committee were unanimous and insiders say had been brought about by governance issues, insiders say.

“He (Dixon) still believes that I’d knifed him, but I hadn’t,’’ Paulin said. “The two key figures were Derek Clayton and (finance director) Doug Bourne and probably the same two in my demise I’d say.

“In retrospect I should have bitten the bullet and gone earlier, but I was hanging on because the race meant a lot to me personally. I was over at a congress in Barcelona and when I came back I was put out on the spot by Clayton and Bourne. They just came to my office in Olympic Park and they wanted me to go straight away because they thought I’d take everything with me. I never had a contract. It was always word of mouth with me.

“I think there was a lot of jealousy about my involvement with AIMS. You had to pay a fee to be a member of AIMS each year and as soon as I was gone, they pulled out of it.’’

Paulin kept running well into his seventies and worked from his Ringwood home running a gardening business called Tidy Ted’s.