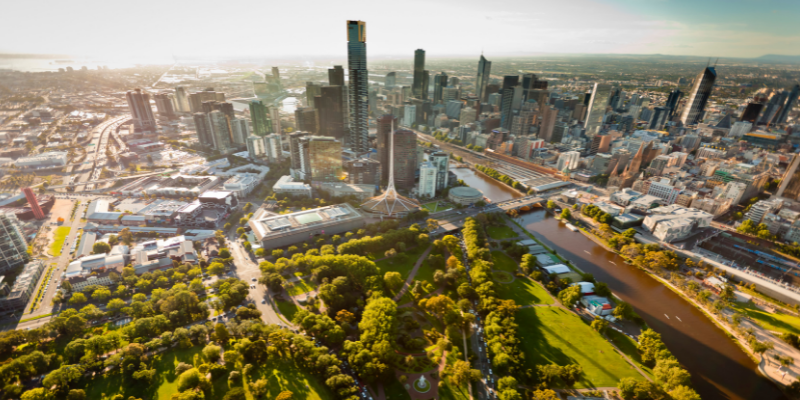 Melbourne! Now is the time to re-discover our city. In true Melbourne Marathon style, we have put together five of our favourite Melbourne running tracks for you to explore this long-weekend.

Why not make a day of it? Invite along your friends. Enjoy lunch at one of Melbourne’s iconic cafe’s or restaurants! Plan a picnic in one of the many parks and gardens. Take a moment of gratitude and celebrate the day.

Learn about the planets and space as you run or walk your way through the Solar System. Instead of navigating 5.9 billion kilometres from the Sun to Pluto, you only need to complete a 5.9km trail (11.8km return).

Along the Port Phillip Bay coastline from St Kilda to Port Melbourne you can find sculptures of the Sun, Mercury, Venus, Earth, Mars, Jupiter, Saturn, Uranus, Neptune, and even Pluto. The 1 to 1 billion scale model of the Solar System was constructed by artists and scientists way back in 2008.

Melbourne’s most popular running track, The Tan, is 3.8km of gravel track that loops around Kings Domain and the Royal Botanical Garden’s. The Tan attracts footballers and Olympians but is suitable for runners of all abilities.

Originally a horse track, the path is mostly gravel and can be challenging depending on your starting direction. Taken clockwise, as most people do, you’ll face Anderson Street hill (#FeelTheBurn). No matter the direction though, you’ll see some of Melbourne’s most iconic attractions, including the Arts Center Spire, The Yarra River and The Shrine of Remembrance.

Head to No.179 at 179 Domain Street for a takeaway coffee and sweet treat and enjoy them in the Royal Botanical Gardens.

Enjoy picturesque views of Albert Park Lake and be inspired by the world’s fastest cars as you run next to the Melbourne Grand Prix’s racing track. Don’t be fooled though, the 4.7km course may be flat but can be accompanied by a strong headwind. But keep going and your bound to be kindly greeted with the tailwind on your way round.

Visit Fat Albert Cafe and order your lunch takeaway to enjoy back at Albert Park Lake.

If you have not heard of the Capital City Trail, it is very likely you’ve already stepped foot on it. The 29km track takes you through Melbourne’s city centre, past iconic Melbourne landmarks such as the NGV, Royal Botanical Gardens and MCG. Keep following the Trail and enter inner-eastern and northern suburbs before returning to Melbourne.

At a closer look, you will notice that the entire trail can be segmented into smaller trails, such as the Main Yarra  and Merri Creek trails. Break it into sections or do the whole thing as part of your #MelbMara training.

Just under 7km from Melbourne city centre, Yarra Bend Park is inner Melbourne’s largest area of natural bushland. Immerse yourself within the native fauna and flora as you follow along the Yarra River and river red gum that shades the water banks.

This 9.5km loop has the magical ability to melt away your worries, you’ll be feeling a total disconnection from the city’s hustle and bustle, Melbourne who?

Start and finish at Fairfield Boathouse and while you’re there be sure to devour their Devonshire Tea, featuring their famous scones.