Who are the Melbourne Marathon Spartans?

Home » News » Who are the Melbourne Marathon Spartans? 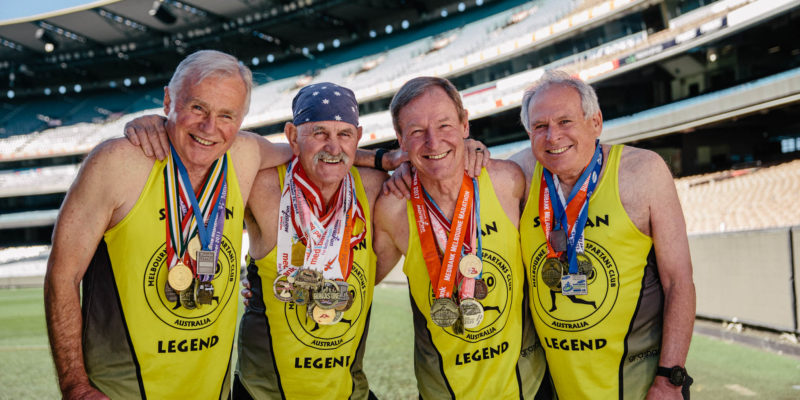 How was the club formed?

In 1978, over 2,000 people took place in the inaugural Melbourne Marathon on a course that began in Frankston, headed up Nepean Highway and finished outside the Melbourne Town Hall. 1,947 of these made it to the finish line.

10 years later, in 1987 Race Director Ted Paulin realised that there were quite a few runners likely to complete all ten. He decided to follow the South African Comrades Ultra-marathon tradition by allocating a lifetime number to all these runners. He also named them “Spartans” paying homage to the home of the marathon. Finally he ensured that these 86 men and two women would run in distinctive gold singlets with the word “Spartan” displayed prominently. Spartans after 1987 were given green Spartan singlets.

Three days after the running of the 1989 marathon a meeting was held to form the Melbourne Marathons Spartans Club. It was chaired by Brian Dixon, Minister for Youth, Sport and Recreation who played 252 VFL games and became Spartan S100 in 1990. The first President of the club was Ken Matchett, with future presidents Peter Ryan and John Dean also members of the initial committee.

By 1997, the number of “gold” Spartans had declined to 35 who ran in gold 20-year singlets. In following years 20-year Spartans received red singlets. Different coloured singlets were issued for:

In 2013 the “Hall of Fame” was established for Spartans who complete 30 Melbourne Marathons. It now has 48 members.

There are 1393 males and 148 females who have achieved Spartan status, with two wheelchair Spartans. 292 Spartans ran in 2019, including 60 running their tenth.

Under fourth president Jay Fleming the club continues its role in record keeping and maintenance of member details. The Annual General Meeting is held at the MCG with distinguished guest speakers presenting singlets to incoming and milestone Spartans. It supports the Cerebral Palsy Education Centre (CPEC) and has four Honorary Spartans – students of CPEC who have completed ten of the shorter marathon day events.

In 2021 the club increased Club Runs to monthly on the fourth Sunday of the month. These runs consist of one or more laps of the Tan with the opportunity to mingle over coffee afterwards. The club publishes four newsletters a year, which include articles where members discuss their marathon experiences.

Want to know how you can become a Spartan? Find more information here.