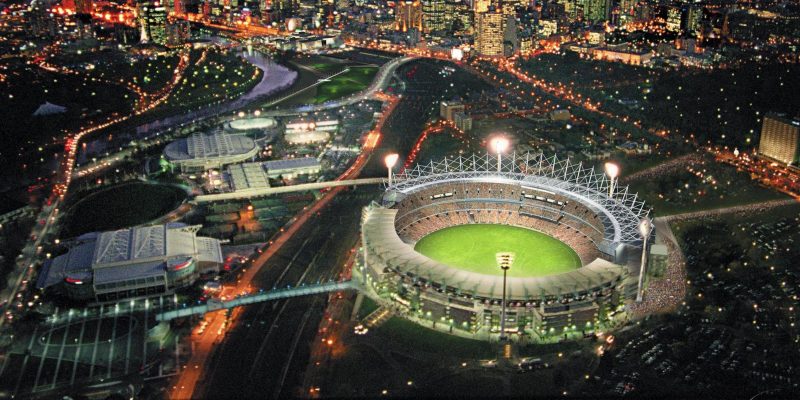 The ground was built way back in 1853 when the then 15-year-old Melbourne Cricket Club was forced by the government to move from its former site because the route of Australia’s first steam train was to pass through the oval.

Since then the MCG has established a marvellous history that compares favourably with any other in the world, hosting plenty of international cricket including the first-ever Test and the 1992 World Cup final, countless VFL/AFL Grand Finals, and the 1956 Olympic Games.

We are taking a look back at some of the most iconic moments of the MCG.

9 – The MCG has hosted three Bledisloe Cup rugby union matches in its history, with an average attendance of a healthy 81,529.

8 – The first known soccer (or ‘football’) match played at the MCG was between Victoria and Tasmania on July 17, 1912.

Since then, there have been more than 45 soccer matches at the ground, ranging from friendlies through to World Cup qualifiers and Olympic competition.

The official record crowd for an MCG soccer match is 99,382 on July 24, 2015 when Manchester City took on Real Madrid as the International Champions Cup came to Australia. This surpassed the previous record of 95,446 on July 24, 2013 when English Premier League club Liverpool visited Australia for the first time to take on Melbourne Victory in a friendly.

7 – Rugby league was first played at the MCG in 1914, with a New South Wales team playing England.

The Melbourne Storm played at the MCG twice in 2000, winning both times. One of those wins was a 70-10 humiliation of the St George Illawarra Dragons in the rematch of the infamous 1999 decider.

6 – After the outbreak of the Pacific war, the Commonwealth Government requisitioned the MCG for military purposes.

From 1942 until 1945 it was progressively occupied by the US Army Air Forces, the Royal Australian Air Force, the US Marine Corps and again the RAAF.

More than 200,000 personnel regarded the ground as their home away from home.

5 – The MCG always has been a very popular venue for concerts.

The MCG has seen a number of modern-day concerts at the venue since David Cassidy first graced the stage on March 10, 1974.

In 1978, David Bowie held a concert there and Linda Ronstadt followed suit in 1979.

The Rolling Stones held concerts in 1995, Michael Jackson toured in 1996 as part of his “History” tour, the 3 Tenors (Placido Domingo, Jose Carreras and Luciano Pavarotti) performed in 1997, while Elton John and Billy Joel provided a compelling double act in March, 1998.

4 – In 1859 members of the Melbourne Football Club devised the rules which became the codified rules of Australian Rules football.

Football was played on the MCG for the first time in 1859 and since the late-19th century the MCG has been the symbolic home of football, first in Victoria and, with the establishment of the Australian Football League, in Australia as a whole.

The Victorian Football League (VFL), which was founded in 1897, held its grand final for the first time at the MCG in 1902.

3 – The Melbourne Cricket Ground is one of the most famous cricket grounds in the world.

There have been countless memorable cricket moments and records created at the MCG since the first Test in 1877.

Take a look through a history of cricket at the MCG that has seen just about everything:

It was the largest sporting event to be staged in Melbourne, eclipsing the 1956 Olympics in terms of the number of teams competing, athletes competing, and events being held.

1- Perhaps the MCG’s most famous moment in history was as the main stadium for the 1956 Olympic Games.

As November 22, the date of the opening ceremony, drew closer, Melbourne was gripped ever more tightly by Olympic fever. At 3pm the day before the opening ceremony, people began to line up outside the MCG gates. That night the city was paralysed by a quarter of a million people who had come to celebrate.

Get ready for your MCG moment on 14 October by registering for #melbmara here.