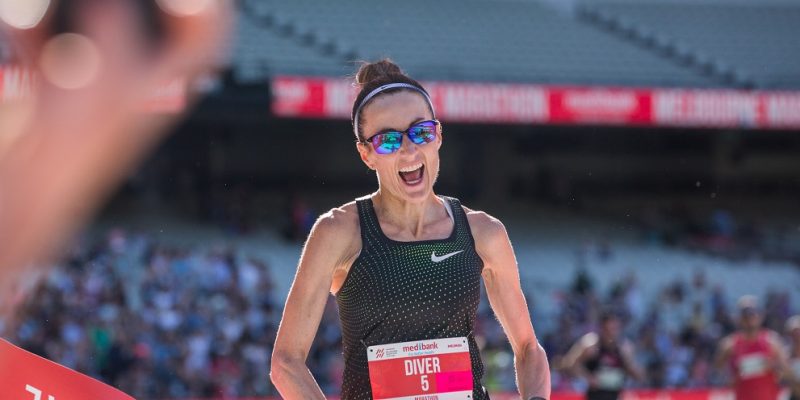 Medibank Marathon numbers jumped back up with more than 7000 entrants and 6373 finishers – our largest tally since 2014 and we were again the largest marathon in Australia this year.

The Sri Lankan Airlines half marathon sold out and we finished with a record 9968 finishers making us also the largest half marathon in Australia this year.

It was 15C and there was barely a breeze when the marathon began at 7am and it was still only 18C when the half started at 8am. It was 22C when Liam Adams crossed the line at 9.15am and the south-easterly winds had started gusting at up to 20km/h. By 2pm when the last runner crossed the finish line it was 25C and gusts were up to 37km/h.

Diver’s winning time is just 26 seconds off the world record for a 41-year-old, but she does obliterate the national over-40 record along with Melbourne’s over 40 race record of 2:33.27 set by Olympian Susan Hobson when she won the event in 1999.

Diver becomes the third 41-year-old to win the race. At 41 years 8 months, she is one month older than Hobson, but two months shy of Hong Kong’s Winnie Ng, who won the race in 1994.

Adelaide’s Michael Roeger, an arm amputee, stepped up to the marathon and smashed the world record for the T46 ambulant category. He finished sixth place overall in 2:23.31.

Ballarat marathoning legend Steve Moneghetti, now 56, clocked 73.56 to win his age category in the half.

Antony Martin becomes the first 90-year-old to compete in our event. He finished the half marathon in 4hours and 12 minutes.

WHAT THE WINNERS SAID

On Jack Rayner  who helped pace her to 37km

“He (Rayner) was an absolute legend, I wouldn’t have done it without him. When we were heading up St Kilda Rd the wind was picking up and he just said ‘no worries, I’ll go a bit further’.

“Sonia has really helped me out. She’s given me so much advice on training. She’s been unbelievable.”

On winning and next race

“This has been one of my best years and I really wanted to cap it off with a good marathon. I kind of doubted myself a bit and the crowd was unbelievable. It really lifted me. I’m not sure of my plans yet and whether I’ll be doing Doha (world champs 2019).” Her coaches later confirmed that London 2019 was likely to be her next marathon.

On the crowd support

“This is a big event and to get a win on home soil is massive. The crowd was just fantastic. The last time (Gold Coast Commonwealth Games marathon) the support had a negative effect and I just wanted to bury my head in the ground. But this time I loved it.”

On the Kenyans and his injury late in race

“I was very happy with the pace early and then I made my move at halfway (66minutes), but I paid for it a bit later when the nail on my little toe starting digging into my foot. I’m going to have to get that looked at, because it’s happened in my past few races. I ended up limping home the final 2km. I knew I had a sizeable lead, but Dominic is world class. That’s why I kept looking around to see where he (Ondoro) was.”

Cowes-based legend Frank Biviano decided to pull up stumps after completing his 40th Melbourne marathon last year. But the other five Legends, who have run every Melbourne since the race’s inception in 1978, all got through relatively unscathed.