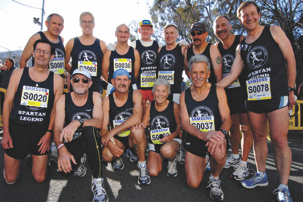 Many of you will be aware that the title off Spartan Legend is bestowed upon a select few who have completed every Melbourne Marathon since its beginnings in 1978.

The youngest of this group, Manny Karageorgiou, has been battling multiple myeloma for several years now.

Late last year he was having chemotherapy in the lead up to the 40th anniversary event and was hospitalised at the Spartans AGM in September, where Rob de Castella made a special presentation to the group.

But so keen was Manny to again run, that he managed to get his doctor to agree to allow him to start, which he did along with the other six Legends.

His son, Pana, was waiting for him near Flinders St Station, when he withdrew from the event for the first time in 40 years.

The Melbourne Marathon thanks Manny for his many year’s of support of our race and pass on our condolences to his son Pana at the rest of his family. 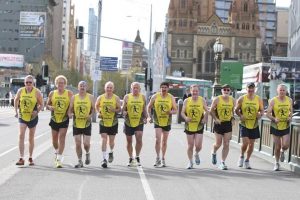 Manny was just 22 when he took part in the inaugural race.

“I have always been up for a challenge and the thought of running a marathon excited me, especially as my parents and lots of my family are from Greece, the home of the original marathon,’’ Manny said.

“Back in those days, there wasn’t much information on how to train and I hadn’t researched it thoroughly. The original course started off uphill in Frankston and I sprinted off keeping the leaders in my sight. I hit Seaford (about 6km) and I was gone.’’

His best time was 3hrs 26min was recorded in 2001, and prior to contracting cancer he ran most days and shared a common hiking interest with his son Pana.

“In the past few years I’ve completed the Kokoda Track with my son, Pana, and trekked to the base camp at Mount Everest, so I reckon I’ll keep running them while I can still stand on my own two feet,’’ Manny said in 2012.

“I would like to do the Athens Marathon one day, but it’s always the week after Melbourne and, being the youngest of the Legends, it makes it very hard because I can’t pull out.’’