5 Things A Champion Marathon Runner Wants You To Know 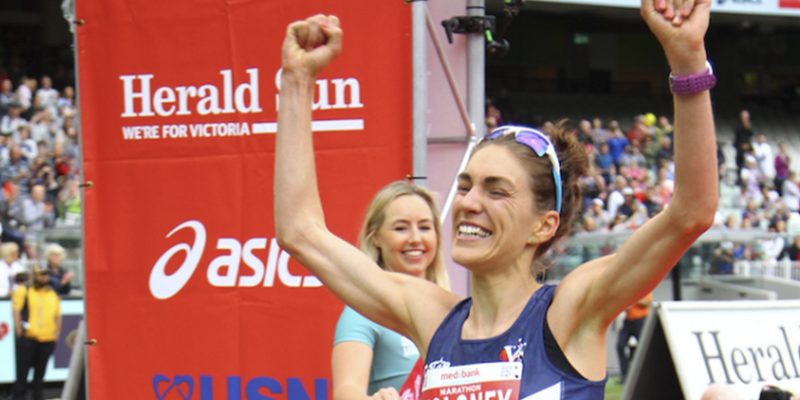 Running is tough. Whether you’re a newbie trying to crack their first 5K or a veteran sprinter gunning for the medal, you’re bound to encounter a few bumps (and blisters) along the way. It can be tricky to know which advice to follow, but lucky for you, we asked the 2016 Medibank Melbourne Marathon Festival winner, Virginia Moloney, 27, for her top tips so you can skip the guesswork and conquer your goals.

YOU CAN START ANY TIME

“I wasn’t always a runner. Growing up, my main focus was playing netball, but in 2011, I started running 6km three times a week with my sister, Genevieve. We ran Run4TheKids together, then the Great Ocean Road Half Marathon followed by numerous fun runs. After I started running, I found I really embraced getting outdoors and that I had more energy. I felt more confident in myself and it was a great way to catch up with people. I slowly built up the kilometres overtime, and now I’ve now been training and racing for three years.”

“Marathon training is intense and requires a lot of time, but the preparation changes as you gain more experience and strength. At the moment, I’m doing one run a day, six days a week. My week will generally consist of two long runs (of 30km or more) as well as three speed sessions. The speed sessions are quite intense, so recovery is very important. You need to allow your body the opportunity to rest and perform at its best.

“Other than running, my training week consists of working on my strength and conditioning by doing gym work and Pilates, and I swim twice a week.”

IT’S ALL ABOUT THE ATMOSPHERE

“I’ve run three Medibank Melbourne Marathon Festivals now – the 10km in 2014 and the marathon in 2015 and 2016 – and it has such a wonderful atmosphere. When running the course, I never feel alone. There are always people on the sideline supporting you, and it’s amazing the inspiration you draw from them. It’s such an iconic, fast and challenging course and an unforgettable day – regardless of the result.”

DON’T GET STUCK INSIDE YOUR HEAD

“The biggest test in a marathon can sometimes be the mental battle you face with yourself. In my first Melbourne Marathon, I really struggled in the latter stages of the race, and at the 36km mark of the 2016 Tokyo Marathon, I completely hit the wall. Sometimes it’s just about breaking down the final stages into smaller achievable goals (it’s not 6km – it’s two laps of your local park), or just getting through the next kilometre and reassessing.”

GO WITH THE FLOW

“To run a successful race, it’s all about embracing the ebbs and flows. There are times when it will feel like a breeze and times when it’s tough, but it’s when you embrace those emotions and keep your goal firmly in mind that you’ll make your greatest gains. Respect the distance, be present, and appreciate the importance of taper week!”

This article is brought to you by Women’s Fitness magazine.