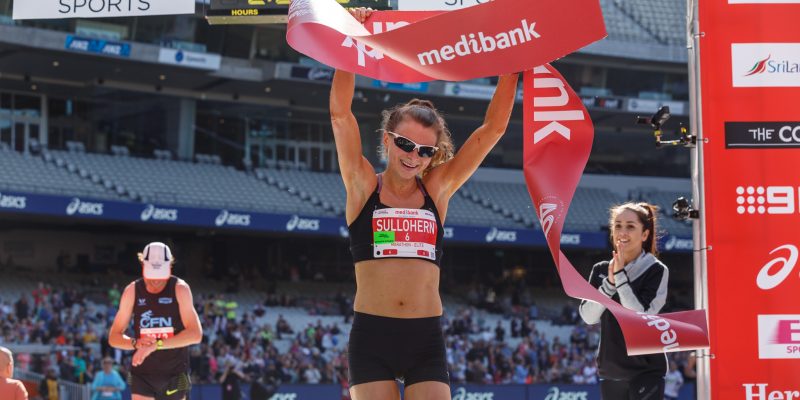 Grafton physiotherapist Sullohern is still hopeful of making the Olympics as a triathlete, but after winning with a time of 2hr29min27sec she may have to rethink her plans.

The 25-year-old knocked more than five minutes off her best time to claim $20,000 for her win in Australia’s largest marathon and also put herself in the picture for a place in the Gold Coast Commonwealth Games marathon.

With her coach Scott Westcott leading a pack of up to 10 runners chasing a sub 2:30 marathon time, Sullohern moved up to 12th on Australia’s all-time fastest marathon list.

But despite winning in front of a large MCG crowd, Sullohern was unsure of where her future lies in athletics.

“Am I a runner or triathlete? That’s the right question, but I don’t know the answer. I find the triathlon a great way of cross training and it keeps me fresh and I’ve entered the Mooloolabah Olympic distance event next march so we will see how it goes,” Sullohern said.

“It was just an amazing feeling today, particularly running on to the MCG, such an iconic place.”

Sullohern’s run put her in the mix for Games selection, although her time was 12 seconds slower than what Virginia Moloney ran on the Gold Coast and selectors may also consider Olympian Milly Clark and world championship 20th placegetter Sinead Diver for the third spot behind Jess Trengove and Lisa Weightman.

The men’s marathon race proved a cracker with Perth-based Kenyan Birir passing his compatriot John Langat just outside the stadium and going on to win by 19 seconds in 2:14.08.

Birir, 38, was forced to immigrate to Australia by his wife Joycline last November, who is studying early childhood development in Perth.

“She told me she wanted to come to Australia and it was a big fight between me and my wife,” Birir said. “But after today I’m loving her choice. I’ve put an application in for permanent residency and hopefully they can see from today’s result that I have the talent.”

Sydney engineer Matthew Cox was first Australian home, posting a Games qualifier with his time of 2hr18min42sec after running the last 18km solo when his training partner David Byrne pulled out with a sore achilles.

“Our group just loves this course and the way (elite athlete organiser) Tim Crosbie looks after us. It’s a shame Tom Do Canto (last year’s winner) got ill, because he was in such great shape he would have gone close to 2hrs14min.”

Ethiopian Makda Haji, turned up unexpected on race morning to win the women’s SriLankan Airlines Half Marathon in a record time of 1hr 10min 39sec while Aussie Brett Robinson was the first male across the line in 64.01.

Over 40,000 spectators cheered on participants as they ran past some of Melbourne’s famous landmarks including Flinders Street Station, Albert Park Lake, St Kilda Beach, the Shrine of Remembrance and the Royal Botanic Gardens before finishing with a lap of the iconic MCG.

Running for a cause was embraced by many participants who raised over $1 million for a charity of their choice, including official charity partner, Cerebral Palsy Education Centre (CPEC) and associate charities, JMB Foundation, Australian Red Cross, Heart Foundation and the Cathy Freeman Foundation.