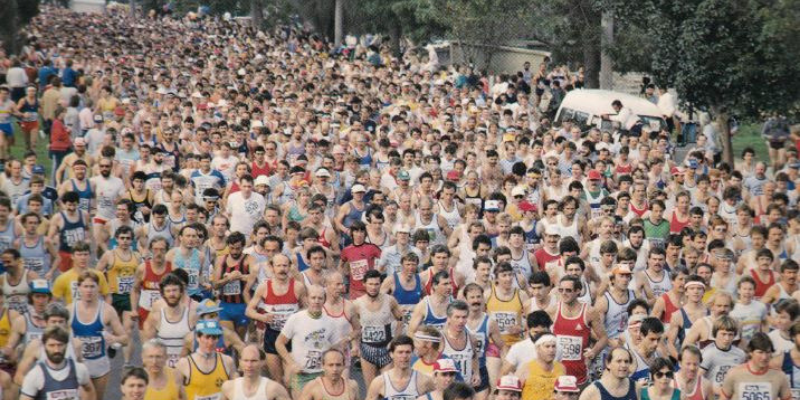 The countdown of the top 10 most memorable Melbourne races continues with our panel of experts selecting 1983 at No.5.

Some argue it was Deek’s win in the world championship in Helsinki in August that inspired runners, others contend the marathon boom was at its zenith, but the 1983 Big M will go down as a high point of the race.

And while the 160cm Tanzanian army captain was left to go it alone early on, Croydon’s Rhonda Mallinder produced a cracking run to break the women’s race record on debut with her time of 2:37.56 under the Olympic qualifying standard. The interest in the event even meant then Victorian Premier John Cain was on hand to give out the prizes at the finish line.

A total of 4815 runners finished the event, a record that stood as an Australian best until 2010, but in one sense the race proved a fizzer.

Ikangaa had company for just 7km and then ran solo into a slight headwind all the way to the Arts Centre to win by six minutes in 2:13.50.

“It was the slowest marathon I’ve ever run … but the fastest I’ve ever run being alone,’’ Ikangaa said. ‘’There was no one to chase me so I could go faster … no one to help me make a fast time. I was alone controlling the pace, and when you are alone, you think you are going faster, but you are not going faster.’’

While future race director John Mallinder was 19th on marathon debut in 2:29.27, it was his wife Rhonda who stole the show.

Surrounded by a pack of male runners for much of the way, she capped off a super season that had included wins in the City to Surf and Melbourne’s West Gate Bridge Sun Superun.

The 25-year-old faded a little in the closing stages but still beat Christchurch’s Margaret Walker by more than two minutes.

“I could see the official time clock ticking over as I raced towards the finish. I knew I was close to the record and I tried so hard to beat it,’’ Mallinder, who initially was given the same time as Sue King’s 1982 effort, said.

Two hours later her time was improved by one second.

Tony Barber, then 43 and Sale of the Century host, finished in 3:22.41 and enjoyed plenty of support. “It was tougher than anyone told me it would be, harder than I thought possible,’’ he said.

Former Hawthorn captain David Parkin went into the race with a cold and had a tough day. He blew up at 32km and needed a dose of sugar so badly he offered to exchange his $160 watch for a Mars bar at a kiosk.

A woman on the roadside gave him a barley sugar to suck on and he hobbled home to the finish. You won’t find Parkin’s result listed as he missed the entry deadline and ran without a race number.

Mona says: “I remember watching Ikangaa win in ’83; such a bouncy style and beaming smile – how exciting was his rivalry with Deek in the ensuing years.”

Turney says: “Another international star Juma Ikangaa whose legendary battle with Deeks in the Commonwealth Games a year earlier made for huge media coverage.

Muirden says: “Ted Paulin’s decision to head to Brisbane and sign Ikangaa for peanuts was arguably his greatest achievement. The 83 race was at the height of the fun run boom and everyone, including celebs like Tony Barber wanted a piece of the action.”