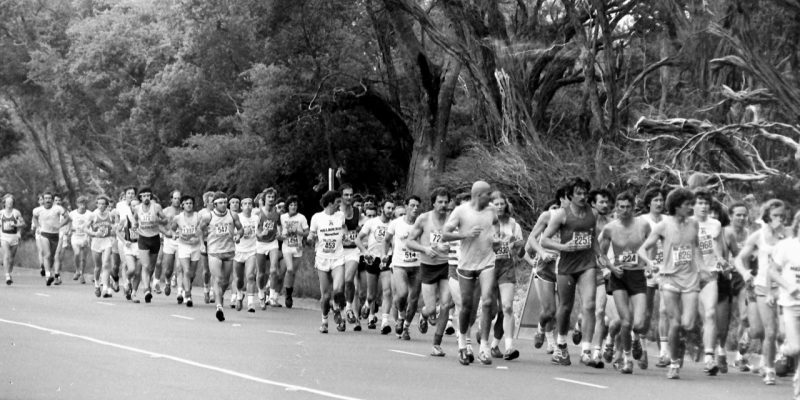 The countdown of the top 10 most memorable Melbourne races continues with our panel of experts selecting 1978 at No.4.

Advertising guru Peter Clemenger had implored his mate Brian Dixon, then Victorian Minister for Youth, Sport and Recreation, to follow the trendsetting New York Marathon and establish a People’s Marathon for Melbourne.

The first year was a rushed event, staged on November 5, less than a year after Clemenger had rushed into Dixon’s office.

Big M flavoured milk had quickly come on board as sponsor. “We hope to have at least 1000 starters,” Victorian Dairy Industry general manager Brian Maley said. “Anyone of any age can compete. It will be a personal challenge for people to see if they can finish.”

The course had been advocated by running great Ron Clarke, who had visions of replicating the Boston point-to-point style race.  Runners started in Foote St, Frankston, near Delacombe Park, and headed straight up Nepean Highway and

St Kilda Rd to the finish at Melbourne Town Hall.

Despite minimal publicity, the race attracted about 2500 runners and the trains were packed with runners heading down to Frankston.

“When I won the state title the media gave it scant coverage, but the Big M captured the imagination of the people,” Scott said.

“The kids at school (he taught at Ringwood Primary) got a kick out of it. I was a bit of a hero. I’d tell the kids the only race you needed to win was when a leopard was chasing you.”

Sydney’s Liz Hassall, who had won the City to Surf in August, decided to run her first marathon at the last minute catching a standby flight the day before with TAA.

On race day she headed off at a fast pace, thereby missing the radar of local race favourite Adrienne Beames.

“I just didn’t know she was in the race. I was watching two other girls ahead of me early, but I knew I had them covered,” Beames said.

Hassall started cramping at 30km and walked through a few aid stations but kept her form to be first female to the Town Hall.

The first event had a 5hour cutoff, which was extended by 16 minutes.

Turney says: “The first Melbourne marathon and without this we wouldn’t be where we are today. Gave Melbourne a marathon for the masses

Muirden says: “Sometimes pollies use their power to do good things and Brian Dixon’s passion to make a “Life Be In It” statement is still paying off today.”